2014 Jan Cleveringa
"You've Got Stars in Your Eyes"
Interactive Installation 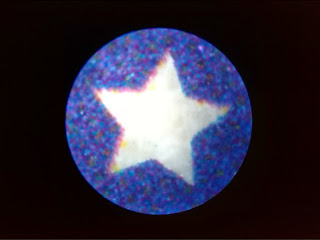 “Looking, literally, through a microscope” the viewer is focused on the Australian Flag as part of Australian identity and more specifically on the smallest star in the Southern Cross. The flag is bedded down as a sticker onto a transparent plastic slide. A torch light hits the mirror underneath elucidating and reflecting onto the flag literally “shining a light” on probably the most prominent symbol of Australian identity. The circular image with a star shown here is a photograph taken through the microscope as a viewer/participant would see it. They would also see the various colours in the image that make up the blue and white colours in the print, perhaps, representing the various peoples and different attitudes that a democracy like Australia might represent through a flag when an issue arises in the national interest.

The artist is interested about how this symbol can be manipulated by people to achieve their goals and the dangers involved with regards to Australian Identity and how Australians see themselves For, example, the seeming political football about ‘Boat People’ and along with it the fears, myths and misinformation used and shaped by political parties, interest groups and individuals to achieve their goals in the community. This could also be said true about the subject of climate change in Australia as part of national identity as part of the dominant cultural hegemony of thought that exists (currently) and how it's formed, shared and digested as a population creating a future cultural direction.

“You’ve Got Stars in Your Eyes” is a serious artwork despite the sarcastic title and visual puns involved in the work. The title is a colloquial phrase from the artists upbringing that means to the artist- be warned about being blinded to dazzling things, about being a dreamer or about being starry-eyed to celebrity and charisma. (A phrase likely to be based upon Shakespeare’s words “All that glitters is not gold”.) It can be dangerous without discovering for one-self the seeming objective driven facts and making an informed decision rather than relying on trust and attraction. A person does not need to go far to remember the Flag of Nazi Germany in WWII to understand the positive and negative aspects of such a symbol as a catalyst for using and growing underwritten semiotic values and attitudes. It may seem an unfair comparison in this context regarding WWII but again we need to continually ask ourselves, “Have We got Stars in Our Eyes?” about any of these current and future issues about who Australian's are as a people and who you are personally.
Posted by Unknown at 02:29