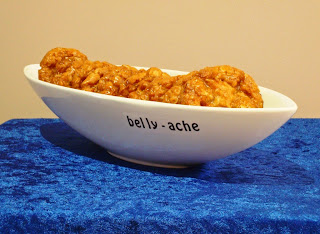 This Sculptural/Installation work is about Australian Identity in terms of symbolic and textual cultural signifiers within the dominant and growing Hegemonic Anzac culture in Australia.

The Anzac biscuits, coated in resin, are symbolically preserved and locked into history as the biscuit that Australian families sent to the troops in WWI due to their capacity to stay edible over time. Every year the tradition is kept alive by Australians eating, sharing and digesting these biscuits on Anzac day, and other days, reinforcing it as a social, visual and digestible cultural symbol.

The word ‘belly-ache’, is used, because it is derived from soldier slang in WWI meaning a ‘mortal wound in the guts’ (Bruce Moore (2000) The Anzacs and their Words). It is an Australian word that is still used today, though it has lost its original meaning it is still used contemporarily to describe an upset stomach. It is idiosyncratically Aussie.

'Belly-ache' is ascribed to the serving tray which is placed upon Royal Blue velvet as a symbol of the boats landing at the shores of Gallipoli. The biscuits represent both the soldiers sitting in the boat and also as a foodstuff that was sent to the troops later by those people that love/d them. They also act as a symbol today.

This reflective artwork is based in a symbolic reality that is both semiotically and literally digested, shared and refashioned every day in Australian culture.

The artwork represents the crisp, starry-eyed, anxious feelings by soldiers in their boat going on an adventure, fresh and unblemished by the hell that is war, and the future to come. These poor soldiers will get eaten alive.
Posted by Unknown at 20:55