Cleveringa is interested in the idea of culture as a shared experience between people. He sees his painting as act of sharing, digesting, and reproducing cultural experiences into something that is refashioned and new.

His current work is about the symbols and signs of ‘male-ness’ in the context of Australian identity. The text that is incorporated are words invoked from Australian culture. These works are about the semiotics behind Australian Identity. 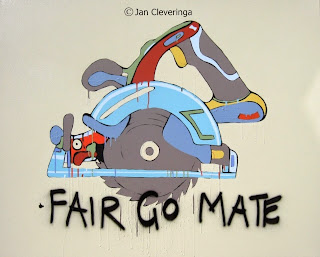 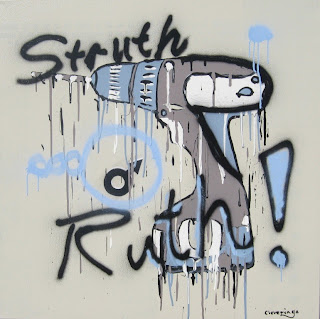 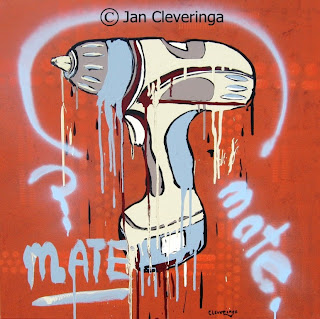 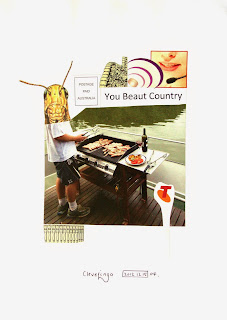 "The You Beaut Country and the Cricket BBQ"
Collage on Paper

This artwork is about the typical Aussie Cricket Barbecue (BBQ or Barbie) where people can be invited over to watch the Cricket on TV either whilst having the BBQ. It might also be a family affair at home.

The use of "The You Beaut Country" text comes not only from a phrase used in Australian culture but also comes from John Olsen's Video documentary some many years ago when he painted Lake Ayers when the rains hit and made the lake massive and full of life (A childhood memory of mine so to say).

The picture, though seemingly humorous using the visual pun of the cricket, is a serious part of Aussie culture in the Summer season and some of the glue that informs Australians that they are Aussies and part of Aussie culture. This may be true for the new migrants too who may learn about Cricket to be less culturally different to others. It exposes one way of fitting into Australian life and an opportunity not to be so different. There are plenty of semiotic undertones and signifiers here into Australian culture, its formation and production, for those theorists amongst us. Perhaps, it's part of the dominant Aussie cultural Hegemony.

Hit it for Six mate! 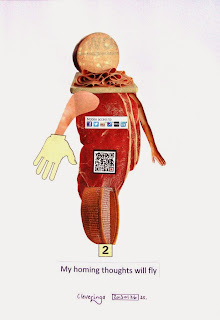 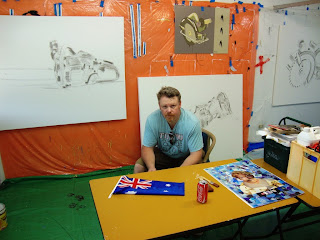 2013 Jan Cleveringa
"Not Everyone Gets Cake"
Collage On 220gsm Paper 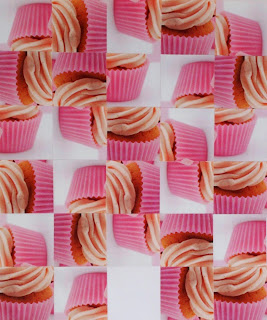 Cleveringa's continuing delving into the context of Australian Identity in his arts practice and his fascination with grid forms, repetition and collage are used to create a tapestry of colour and exaggeration in terms of the welfare state in Australia.

The use of the words 'Dole-Bludger' is common place in Australian households. It is used to describe lazy Australians who are unemployed or refuse to work. It is part of the Hegemonic cultural stereotype used negatively for the unemployed, mostly young people, in Australian society. It has various connotations and uses, including those uses that are humorous and serious in conversation of everyday life. This word is also invariably used by political parties, and those in power, when there are points to be scored. Rarely is the term used when one uncovers the real need for a helping hand and their desperate, fragile position when needing the assistance. In the past, particularly in the Great Depression in Australian, the word 'Susso' was used meaning sustenance. Having a benefit was okay back then as half the country was unemployed including the middle class and rich.

Cleveringa's somewhat ironic use of the saying- 'not everyone gets cake' and his use of the aesthetically saccharin, pink iced cupcakes which are seemingly attractive to the eye and the stomach speaks about the 'Haves and Have Nots' in Australian society.
Posted by Unknown at 21:23 No comments: 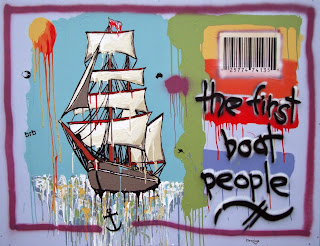 This artwork is about the symbols and signs of ‘male-ness’ in the context of Australian identity. The text that is incorporated are words invoked from Australian culture.
Posted by Unknown at 07:27 No comments: 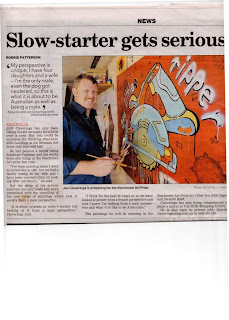