'Doing the Math' is a factory and commodified looking sculpture made from recycled materials using a dispersed angular form talking about technological rebirth, change by stealth, slow cultural change and waste-renewal much likened to a "zero sum game".

"In game theory and economic theory, a zero-sum game is a mathematical representation of a situation in which each participant's gain or loss of utility is exactly balanced by the losses or gains of the utility of the other participants.

The artwork is made from fluorescent light bulbs which are being slowly replaced by new LED technology. The artist recognizes and points to the change, as an idea whereby the change is occurring almost insidiously by stealth and unknown, as generally only a few people in society recognize the global change that is occurring and its potential impact socially in our culture and subsequently in people's lives and it's affect when digesting, sharing and refashioning the environment thus impacting unconsciously on identity.

Furthermore, the artist explores ideas around waste and sustainability and a Call to Action regarding 'Green Power' and it's parameters. 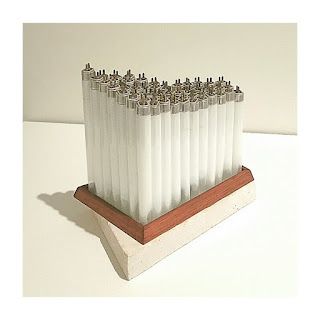 The slim, white lined, sterile, repetitive and banal commodity of 288 defunct fluorescent light globes (tubes) are sculptured into a three tombstones and driven upward, vertically, bare and naked against the growing green, lively, humus rainforest around it, which, constantly grows whilst reclaiming the damaged areas previously caused by human presence which was once a coal mine.

'A Moving World' raises questions about time, sustainability, renewability, the environment and the machine of business. It is also designed to recognize the impact of changing technologies on our environment, our culture, our attitudes and social patterns and what drives these changes.

'A Moving World' is a representation about rebirth, slow cultural change, waste and renewal. The installation is made from 288 fluorescent light bulbs in which its fluoro technology is being replaced by new LED light technology. The bulbs do not light up and are likened to the bones of the past. They are redundant and re-imagined. It is juxtaposed by, and set, in the lush, humid rainforest (of the Blue Mountains, Sydney Australia) which may invoke a range of wider implications.

The tombstone is a metaphor for this rebirth of both technology and the associated social changes of its impact. We don’t often think about how technology changes us socially and sometimes we do. We sometimes predict the future impact correctly and sometimes we get it wrong. We only need to look at the impact of the TV to see how the social pattern of the family living room was affected from once where the seating may have functioned as a square pattern for a conversation- to one, now, more likely as a ‘U’ shape that faces the TV.

This artwork was particularly created to elucidate the slow change and impact as if ’almost by stealth’ in our society as its change is reasonably subtle when comparing it to the TV or the rise of the internet, the mobile phone or global warming’s impact on attitudes in society. We seem oblivious to its changing impact in the many areas of human interaction like waste, industry, the home and future- not to mention influences on architecture, design, mood, the home and business into the future.